Art History, 2: the End as We Know It 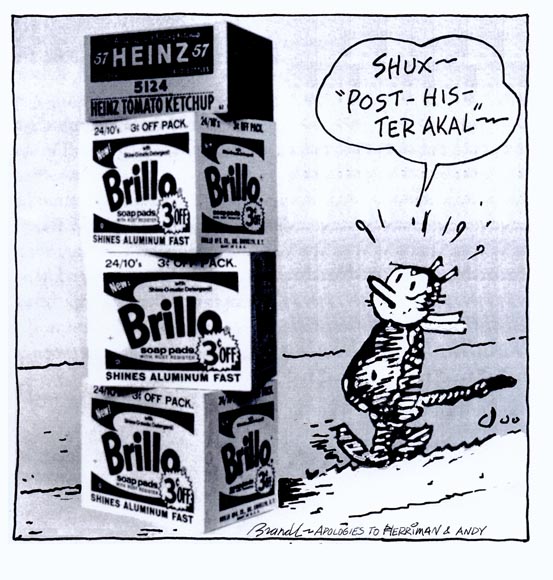 The positions of the two entities Philosophical Aesthetics and Literary Criticism are roughly similar in their influence on my thought. I have been more deeply involved with logic and philosophy for a longer time than I have been with literary theory; hence, although my work here can be seen as a form of literary and artistic theory, it bears the impress of much aesthetic conjecture. The contemporary philosophy of art has supplied me with essential concepts that I have used in my reasoning. The philosophers who interest me have more fundamental concerns than literary theorists — generally questions of ontology, epistemology, phenomenology, occasionally problems of metaphysics, politics, logic, aesthetic quality, and more. One of the most important theories straddling these two realms is the “Institutional theory of the Ontology of Art.”

George Dickie has pointed out an important distinction between the descriptive and the evaluative senses of the phrase “a work of art.” This is especially important to explain when teaching and discussing art and art history and bears heavily on my theorizing. Eliding the two aspects Dickie mentions leads to many of the problems people have in separating judgments of quality from mere category decisions. My theory does not directly engage the question of whether or not the creation of what I have subsequently come to call a metaphor(m) or central trope is an element in a descriptive, categorical definition of art itself. This could be a potential area of consideration in the future. Certainly, however, various theories of the ontology of art, and my reactions to them, color my thought, therefore I discuss them now and in the future. Nonetheless, in general I wish to concentrate primarily on the epistemological and evaluative — which I believe is what the artworld needs to do in wahtever will be “Post-Postmodernism.” We need insights into aspects of how great works of art are formed and how they refer to life beyond their formal boundaries.

Whereas Dickie is concerned with the definition of art itself , Monroe C. Beardsley’s ontology concerns the definition of the philosophy of art. He asserts that aesthetics equals metacriticism, which in turn suggests new possibilities for theorizing. To me, a useful theory of art must be clearly both creator-based and object-based, while assuming an active perceiver.

The mere fact of its social “framing” has been declaimed recently as the defining quality of art, perhaps in order to oppose the anti-categorical prodigality suggested by Wittgenstein’s notions. The late philosopher and art critic Arthur Danto, has given rise to a new theory of the ontology of art, which is still currently the most wide-spread and influential one. This is called the “institutional theory of art” and is the creation of George Dickie, who was inspired to develop it after reading Danto’s works. Danto may be responsible for the notion, but he has continuously worked to distance himself from it, if rather unsuccessfully.

Dickie’s assertion is that an object becomes art through being accepted by those with power in the artworld. Thus, to generalize, art is defined by institutional acceptance, hence the name of the theory. There is, for Dickie, no essential quality which defines art as a whole. In a very watered-down and sociological form this belief has come to dominate much of the visual artworld, and has trickled into other fields, such as literature. Making works which illustrate this point has engendered some very mechanically vacuous art and criticism, which is probably the cause for Danto’s distrust of the logical outcome of his own endeavors.

Danto has other ideas and purposes as well. One discerning perception he has made is that art, at least since Duchamp, has tried to become the philosophy of itself. Most of contemporary literature and art has indeed become, or at least integrated, its philosophy of itself. I am “guilty” of this too, in my paintings, installations, writings, and to an extent in my theory of metaphor(m). Yet, I assert that this can work in other directions than those that now predominate. Unfortunately, many admirers of the institutional theory do not realize that this incorporation of philosophy into works of literature and art does not limit them to doubting their own existence.

Philip Ursprung has effectively and surprisingly revealed an anticipation of this problem in his book Grenzen der Kunst.1 He discusses how the artists Allan Kaprow and Robert Smithson, each in his own fashion, altered the dominant question “what is art?” to “where is art?”, thereby challenging not only art production but also art history writing to transform ontology into a unique form of epistemology. Yet this entails a new set of epistemological questions, not the traditional one of “can we learn from art, and if so what?”, rather “does art serve as a tool of understanding?”, “is art a model of ever-expanding and inclusive interpretation?” and others. There are indeed many major questions and fields of philosophy besides ontology, and even within ontology there are many potential responses beyond cynicism. This popular, simplified institutional theory has been a kind of fuel refined from cynicism thrown on the bonfire of sophistry built by critics enamored of literary theorists. By basing my conjecture on interpretation through trope as thought process, I believe I have discovered a vital function of art which includes as one element, but not solely, “framing” — as seen in the institution of the artworld. The social or cultural conditions in which literature or visual art is disseminated is one of many elements which could be utilized in the making of art.

According to Danto in The Philosophical Disenfranchisement of Art, aesthetics must be separated from art in order to re-enfranchise both. This, he feels, is the necessary activity to be conducted now that we have experienced “the end of art history.” This end, let me cry to the heavens, though, is NOT the end of art, as it is often misinterpreted.2 It is the death of the western-Eurocentric master narrative, that single simple march-of-history idea, which was taken for granted until recently. I fail to see this as a cause for despondency as so many people do, although their disquiet is understandable. History has ended only as a singularity. It has a new beginning as a plurality (although not truly pluralism, I argue), which again brings us to an expanded image of the “text” as a braided cable or rope of many strands.3

Perhaps, this is a situation for rejoicing as we are finally beginning to see beyond our self-imposed limitations. Any such tale of dominance cannot end soon enough. It is simply the long, drawn-out result of post-colonial depression by once-and-not-future kings. This is the inevitable result of the pressure of realizing the existence of the rest of the world, including other peoples, other cultures, other continents, other sexes, other classes, other levels (i.e. “low” popular art), in short, the pressure of accepting others. Re-enfranchisement is important, but it must be “worked through” to come into existence; it cannot be merely announced or accomplished in gestures. We now have a conceptual consciousness which offers the opportunity for an antithetical misprision of the intellectuality and expansion of art Duchamp gave us against his own will. What we have experienced is the death of one major foundational metaphor. Let us try to replace it with more inclusive and charitable ones.

In his essay “Refining Art Historically,” Jerrold Levinson has proposed a logical, historical widening of the Dickie/Danto institutional theory into an interpretive one emphasizing conscious tradition. He sums his theory up in one sentence. “In short, it is [the view] that an artwork is a thing (item, object, entity) that has been seriously intended for regard-as-a-work-of-art, i.e., regard in any way preexisting artworks are or were correctly regarded.” 4 This is a promising re-reading of the institutional theory, subsuming it into a wider and yet more personally delineated field. I would add that part of the definition of art is to explore this “regard” through tropes, that art seeks to defy previous definitions and redefine itself. Art has a metaphoric, agonistic ontology, which is procedural and functional: things made to be regarded and interpreted as art-as-before and not as-art-as-before. 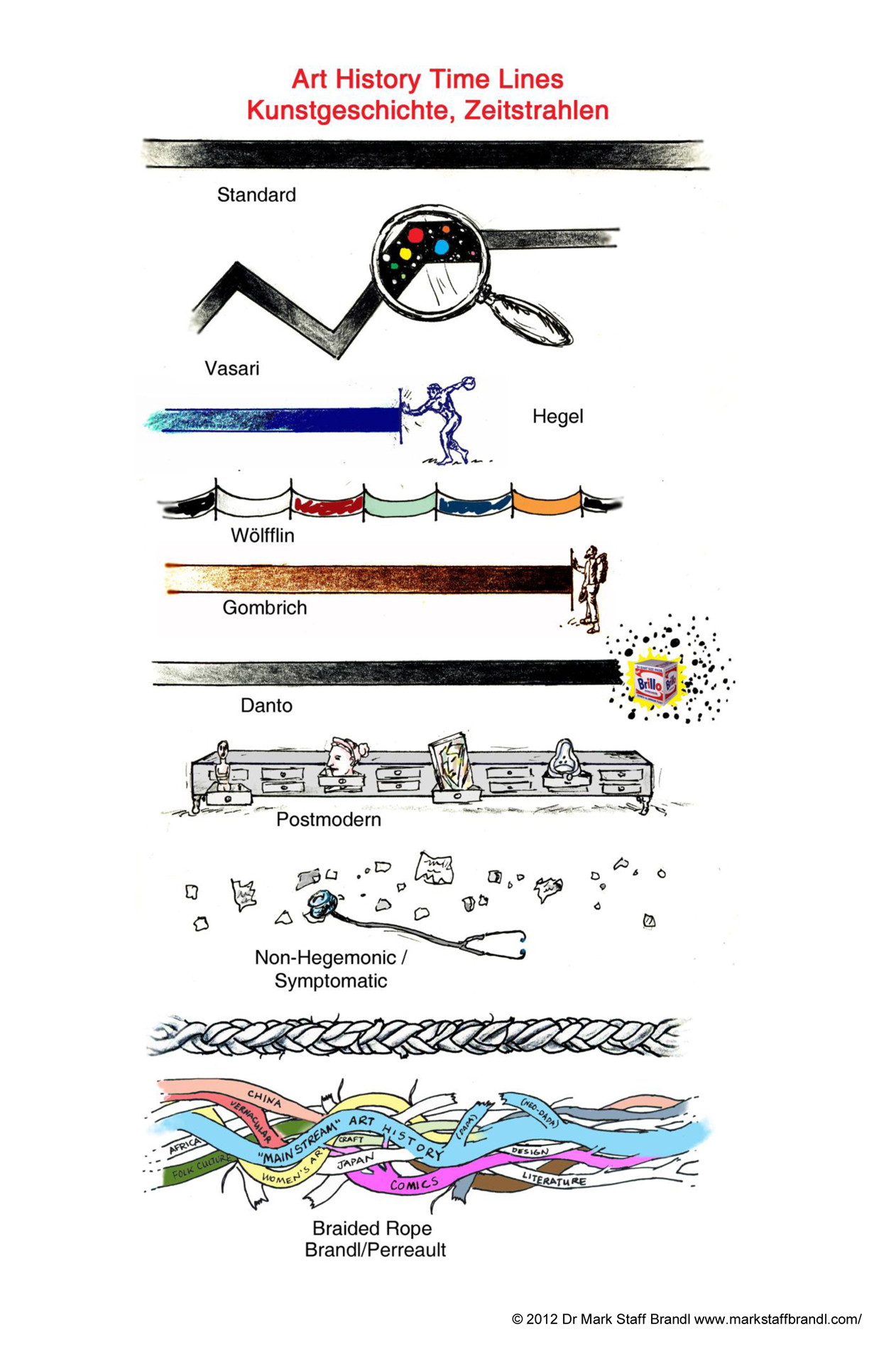