Tropi, Agon et Quo Vadam: How Did I Get into All This Metaphor Stuff

Theories are constructed objects. “They assembled a theory.” George Lakoff 1 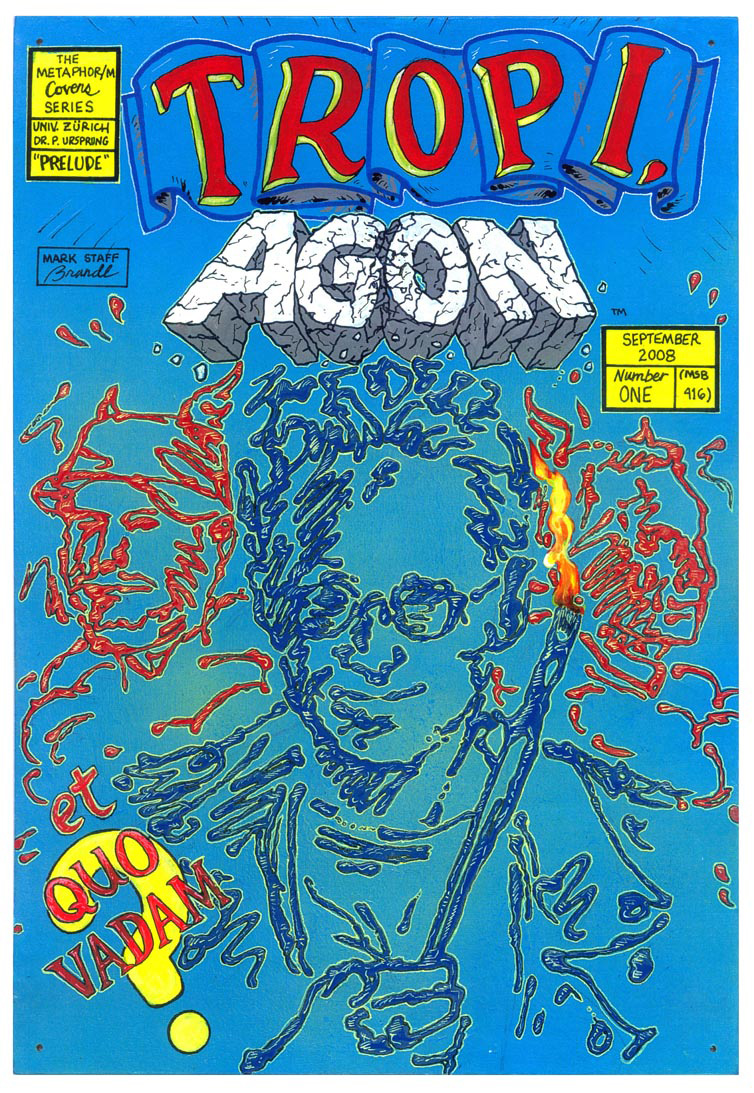 I wrote about my reasons for studying metaphor theory in an article when we began this website. I would like to expand those short comments, emphasizing my very personal path as an artist studying theory, as well as including the names of the books that started me on my way. I hope this encourages other artists to also find their own individual philosophical inspirations, perhaps even ones much different from mine. In the over theorized, academicist artworld of today, it is not the philosophers and theorists who are at fault, but the artworld’s enforcement of a consensus correct reading (and thinking) list.

In the early 1980s, the artworld was in an uproar. It was increasingly clear that Modernism had, surprisingly, indeed been a “period,” not the ultimate state of culture, and furthermore that it was slowly coming to a close. Postmodernism seemed a little insipid, even unappealing at first as diverse anti- or retro-styles vied for the pole position. French literary theory of a Deconstructivist bent slowly became hegemonic, a situation still now in place. Yet, for most artists and authors, Post-Modernism (still capitalized and hyphenated at that time) seemed an opportunity to seek new theoretical inspiration, to free oneself of the previously prevailing Formalism, also termed the New Criticism in literature, while hopefully also offering a way to avoid the trap of what threatened to be a cynical mise en abyme of sophistry under the first influences of Poststructuralism. In heated discussions in New York and elsewhere, artists sought out new interpretations of the inevitably intertwined dialectic of form and content. Art was clearly not all about form, it was plain to see that creators had something to say, to discover. Equally, art was not all about the inability to say anything, about illustrating the unreliability of form as sole content. There was a widespread recognition that, indeed, form was a tool for discovery and yet also the discovery itself. Through that fissure, the great beast, long considered dead, re-arose in a new and splendid form: ludic trope. At first the source of inspiration for many artists, including myself, was Jacques Derrida and the Yale Deconstructivists such as Paul de Man.

Jacques Derrida was a French literary philosopher and the founder of what is called Deconstruction. He argues that much of philosophy rests on arbitrary dichotomous categories, sees language as writing, uses the metaphor of “text” for all experience, and suggests that there is no possibility of intentional meaning. Deconstruction can and has been disparaged as nihilistic, solipsistic, and a-political, but has also contributed greatly to the contemporary critical analysis of art and society, attacking seemingly fixed notions of gender, race, and privilege. I found Derrida’s notions most interestingly presented in Writing and Difference,2 and Margins of Philosophy,3 although Of Grammatology 4 is his most popular book. Many of the theorists affiliated with Yale University in the late 1970s, including Paul de Man, Geoffrey Hartman, J. Hillis Miller, and Harold Bloom, are especially influential in literary criticism and, influenced by Derrida, are called the “Yale Deconstructivists.” One of De Man’s key texts in my opinion is The Resistance to Theory.5

Theory in this vein remains the most powerful force in literature and art departments in universities around the US and indeed the western world. As a rather trendy art gallery owner once commented to me in 2003, “Aren’t ALL contemporary artists Derridaian and poststructuralist now?”6 While this may appear to be true, many of the artists, authors and students who identify themselves with poststructuralist thought do not fully understand it, not truly applying their own preferred theory. They are generally citing it as an influence for fashionable reasons, verbally espousing many of its tenets, such as the impossibility of fixed interpretation, the death of the author, and others. Denis Dutton describes this situation in his article of 1992, “Delusions of Postmodernism” from the journal Literature and Aesthetics:

That contemporary artists are as eager as ever for attention as unique individuals is demonstrated by the fact that they tend to treat their work as an expression of individual subjectivity in discussion and documentation. That the privileged position of the author/artist is not entirely dead in the minds of artists is also indicated by the unceasing tendency of artists everywhere — including those who style themselves “postmodern” — angrily to dispute hostile critical interpretations of their work which “fail to comprehend” their intentions, which "miss the point" of their work. For many artists, complete freedom of interpretation is fine as a general philosophical theory applied to other people’s work, but not to their own.7

What began as a situation promising a possibility for more free artistic play, has unfortunately now become the dominant master of the academy. Renowned art historian, psychologist and art critic Donald Kuspit has asserted in an email that, “In the artworld, followers of Derrida are not against hegemony; they now possess almost complete hegemony.” 8 I first wrote that in 2004. Fierst thought it in 2000. Now, in 2015, many people would claim that this has wained, yet in practice (articles, art school teaching, curator speeches, artists’ statements) it is till true.

It was in this context that my study of literary theory arose — perhaps a bit defensively, yet also out of enthusiasm. In fact, it was more of a return to previous pursuits than a new interest. Throughout my university studies and in my free time I have been actively involved in aesthetics, the analytical philosophy of art. This passion operates in concert with my ardor for and interaction with the possibilities of an “extended” interpretation of the (supposedly dead) medium of painting, of installation art, of comics as an artform, and of display sign-painting. Indeed, I even began my doctoral studies in the department of English Language and Literature (called in German ‘Anglistik’) in order to concentrate on the linguistic options of my endeavor. Later, after I had completed the learning of Latin as a portion of my studies, another opportunity arose as the University of Zurich finally had a scholar of modern and contemporary art as a professor, Dr Philip Urpsrung, whom I met personally when we both were speakers at the convention of art historians in the US in Boston, The 2006 College Art Association conference. Almost simultaneously I became acquainted with Dr Andreas Langlotz of the University of Basel, an expert in cognitive linguistics. These events led me to change to art history, leave my original, more orthodox literature advisor, and begin afresh with the stimulating new influences of Ursprung and Langlotz. Professor Ursprung understood not only my focus, but encouraged me to reach for a whole new form of dissertation, suggesting not only that I investigate other artists’ works, both historical and contemporary, but that I also include my own art in it as an integral component, the performative presentation of the creation of these dissertation works and an attempt to analyze them with the tool of my theory. I was thrilled and yet presented with a whole new range of challenges, which I hope I master.

At first my theoretical research consisted of working my way through key books and articles by and about the most influential poststructuralist practitioners of literary theory and of what has come to be called “critical” theory, the expansion of literary critical theories into the discussions of socio-political questions. Simultaneously, I intensified my already existing involvement with contemporary analytic aesthetics. In both fields, I was seeking points of conjecture which I felt illuminated my understanding of art in unexpected ways, yet also rang true to my experience as an active artist, art critic, art historian and appreciator of contemporary art by others. I was inspired by concepts from many thinkers, as I describe in the next chapter, yet not the entirety of anyone’s system. I have thus sought to incorporate ideas I find enriching from a variety of sources into my own theoretical construction. I now realize that an ulterior motive was also to be able to theorize myself out of the constraints of theory, fighting fire with fire as is often my wont. I sought to discover philosophers offering pertinent , contemporary analysis which, however, also acknowledged agency, that creators were responsible makers of meaning and not mere symptoms of societal flaws. In truth, I heartily hoped for theorists who would go even farther, searching for ones who suggested intelligent means of resistance to an at that time ever-increasing dominance by the radical right of politics and mass media; likewise, seeking methodologies which could serve as insurrection against the even then quickly hardening academic stifling of art in consensus and market sophistry. Books important to me then included Hans-Georg Gadamer’s Truth and Method,9 Bakhtin, Essays and Dialogues on His Work edited by Gary Saul Morson,10 Arthur C. Danto’s The Philosophical Disenfranchisement of Art,11 John Lechte’s Julia Kristeva,12 Cornel West’s Prophetic Reflections: Notes on Race and Power in America,13 and R. A. Sharpe’s Contemporary Aesthetics: A Philosophical Analysis.14

I learned from all these and more. However, most crucially, I found the greatest revelation in the cognitive linguistic approach of George Lakoff and others and in the antithetical revisionist theory of Harold Bloom. Combined, they accorded genuinely with my experience of art while also electrifying me with new possibilities for understanding art, its production and its producers. Cognitive linguistic theory was first widely introduced in Lakoff and Mark Johnson’s Metaphors We Live By15 and Lakoff and Mark Turner’s More than Cool Reason: A Field Guide to Poetic Metaphor.16 Bloom presented his theory initially in a trilogy of books beginning with The Anxiety of Influence.17