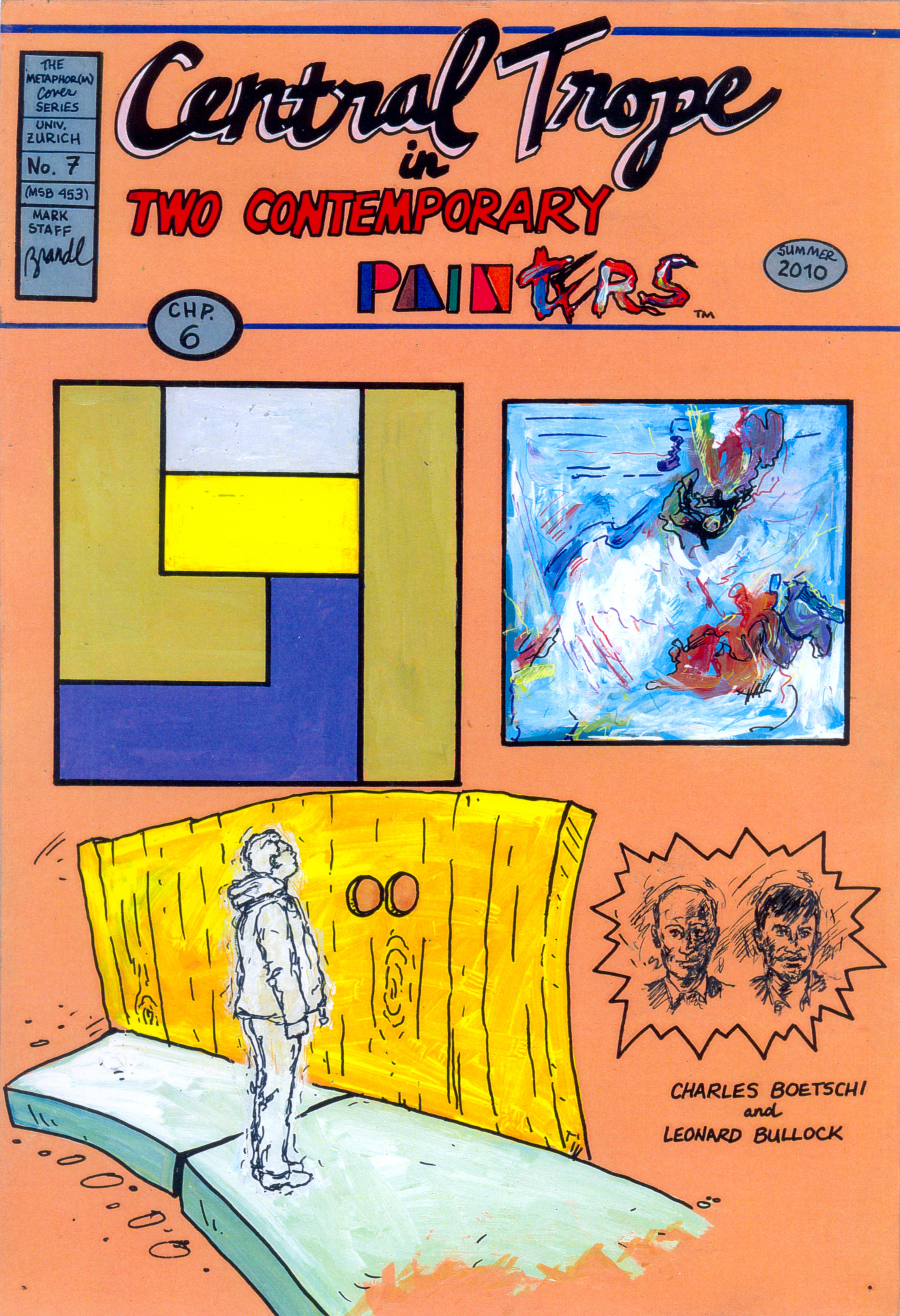 This week, the ninth and last (for the time being at least) of my short series of fine artworks exemplifying major tropes.

The list of major tropes I am referring to I published on this website a while ago, “A List of the Most Important Tropes and Their Definitions”; here is the link: http://www.metaphorandart.com/articles/trope_list.html

As I said, over the last several months, I took each trope from the list and linked it to a major work of art. This included artworks from a large variety of time periods and in many different media. Generally, I was looking for artworks that embody the trope under consideration within their formal elements, clearly showing a trope in visual use. This week, Number 9:

I have discussed metalepsis a few times on this site already. Forgive me if I repeat a bit.

Metalepsis is one of the most interesting and unique of all tropes. I had never considered it deeply until reading Harold Bloom. But what is it? In short: a trope upon a previously existing trope.

Also called transumption, metalepsis is the paradoxical transgression of ontological (and not merely narrative) levels of representation, “a trope on a trope,” is the “trope of tropes” in Modern and Postmodern times (according to Harold Bloom, mainly). It can occur in three ways:

Example: Milton’s simile of Stan’s shield comes from Homer’s Achilles (Illiad) and The Faerie Queen’s Radigund, wherein he anachronistically adds facts garnered from Galileo’s telescope: craters. They were in fact always there, so Milton is more correct, yet while the facts are earlier, nonetheless the knowledge of them is later.

Shakespeare: “All the World’s a Stage.” The Kinks: “Everybody’s a dreamer, everybody’s a star, everyone’s a movie star, no matter who you are.” This updates Shakespeare through metonymy (every common person — instead of the world) is a movie star (instead of an actor on a stage). Although in this instance, it is not clearly “Bloomian” enough in that it doesn’t clearly attempt to be earlier. However, the song’s composer Kinks front man Ray Davies has always been socially critical, so I think he is earlier, in that he places the common man before the generally noble characters in Shakespeare.

A few other short examples:

Pallid death
The effect of death is to make the body ashen. Ascribing this result to death itself as an adjective here is an example of metalepsis.

He is such a lead foot.
This means of course, “he drives too fast” but only through an unstated causal chain of logic: Lead is heavy, a heavy foot would press the accelerator, and this would cause the car to speed almost uncontrollably.

Better: In Laurence Sterne’s novel, Tristram Shandy, Tristram blames his unsettled, troubled life and even his own disturbed temperament (the effect) on his parents’ inopportune conception of him (the distant cause). This is a rather comical and extended example of metalepsis.

A sillier example just for fun:

Elvis Presley once sang a song (NOT written by him) wherein he spoke (NOT sang) “Somebody once wrote that ‘all the world’s a stage.’”

This is, of course, ridiculous, because we all know this “somebody” to be Shakespeare, and we all know Elvis hardly wrote any songs, yet he makes it sound as if he were impromptu composing that phrase on stage. So, I would write a metalepsis about that as following:

“Some king once sang about all the boards being worlds …”

Bringing in ‘the King of Rock,’ a nickname for Elvis, ‘boards’ as in ‘the boards’ — the stage, but also panels, as in paintings, adding to that inversion with the world ‘world.’ Thus, I get representation ahead of (“earlier than”) illusion.

As I was searching for useful exemplary metalepses once for teaching, an amusing event occurred. A young daughter of friends of ours made one off the cuff while teasing her father. He had been teasing her, saying she was impudent, cheeky. She said “The apple does not fall far from the … horse.” It was hilarious. We all expected, of course, the word “tree” as in the typical expression, yet she played a further more complicated joke by making that horse. Making her a horse-apple and her father, in effect, a horse’s ass. The tropaic genius of childhood!

I discussed Vincent van Gogh’s metaphor(m) in an earlier article on this website. Let me expand it slightly in the light of metalepsis. Vincent van Gogh plays a metaphor on the brushstroke of the Impressionists — their stroke was modelled after dappled sunlight, in a fashion — thus a simile. Vincent makes it into a flame-like stroke, a metaphor played on a simile, however one which puts passion ahead of and before representation of sunlight, physically, emotionally, even personally-historic (i.e. like a child). He gets to go toward his goal of expression of feelings as more primary in art, while using the breakthroughs of the Impressionists (and Japanese drawing, but that’s another story). It also gives him wider developmental possibilities, through access to foundational tropes of feeling. He “beats” his precursor by being more primary and getting history backwards.

The Bloomian technique lies in utilizing various conceptions of time together with knowledge of inspirational models (“precursors,” as he calls them, that is, art and literary history). Milton was able to be metaleptically earlier than Homer and Edmund Spencer by using what could be called God’s History, the Bible stories of the Fall of Satin. This purports to be even earlier than the Greek tales with which he vies. In a similar, yet unique vein, van Gogh conceives of history, true to his nature, in terms of the “developmental,” that is an individual person’s life history. This was Paul Klee’s approach as well.

To personalize it, in my own art, I operate metaleptically in the realms of the personal, class and the ontological (contraries being before resolutions). I am using my personal (and thereby American) history, to be more primary than pop and conceptual artists. I do this through the fact of my “fathers” (plural) being a sign-painter and display man (my real dad, Earl Brandl) and comic artists (Gene Colan, my spiritual art dad). Thereby I am inverting the class-based political history, much like Ray Davies mentioned above. My “stroke” is an enlarged, American Chicagoan, loud, James Brown version of the thick-and-thin beautiful stroke of the traditional comics artist or sign painter, “preached up” to the point of Pollock-like strength (thanks going here to inspiration from African-American preachers) and out-Duchampian-ing the Neo-Duchampians by being earlier, truer to his Spirit (by way of citational complexity such as in Tu M’ or The Large Glass and through installation) and not his Letter (the Found Object extensions of Neo-Consceptualism), an inspiration from the African-American conception of respect for the Jazz fathers, while altering them. This is enlarged as well with an actual deep knowledge of European and other art history of the world (as I am also and art historian). This I unite with sequentiality, from Colan and others, as well as sign-painting and display techniques, from my father, and playful use of art history. 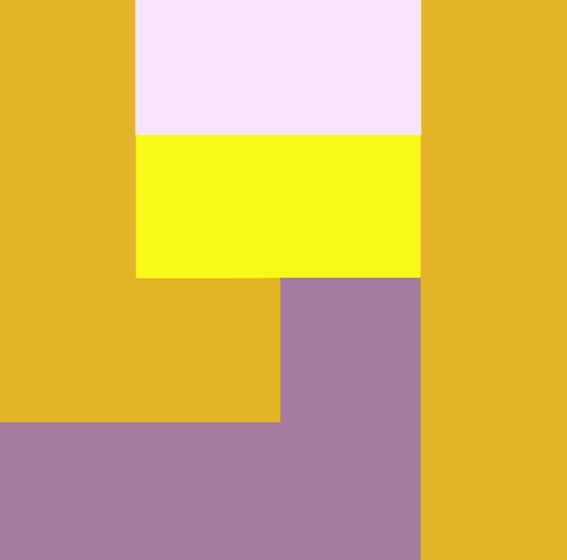 Our chief example this time, in addition to all those mentioned in shorthand so far: Charles Boetschi’s painting Color Unit 24.1, acrylic on canvas, 1998, 200 x 200 cm / 79 in x 79 in. I discussed this work extensively in my PhD dissertation as well an excerpt from that on this site, here. In short, Boetschi, in a very intellectual and visual manner, plays unique and critical tropes and inversions of tropes on inherited and well-accepted metaphors concerning geometric abstraction. Boetschi plays irregularity on and against expected regularity in composition; odd, seemingly representational colors on and against the expected primaries of geometric art.

His personal central message is that unbalanced surprises in color and composition show the contradictory truth of experience. Boetschi maps geometric composition on abstraction (and its associations of regularity, nonrepresentationalism, even coldness) and simultaneously oppositionally blends the colors of the geometric forms with referentiality and evocativeness. Thus his metaphor can be stated in several fashions including: “Geometric forms are nonrepresentational, yet their colors are referential.” His central equation is: “Composition and color are visually irregular,” thus yielding “surprising perception,” which imparts “new ideas,” which supply “understanding.” The postmodern complexity in this metaphor(m) is the fact that his image-mapping relies on our expectations from the history of the forms with which he works. Significantly, this painting is both idiosyncratic and global in implication.

And he does all this with sincerity, not stooping to the easy irony of Neo-Geo works.

Harold Bloom suggested that metalepsis could or would be the chief trope of Postmodernism. Due to academicism, mannerism and perhaps even indolence, the chief trope of this period has instead become irony. (See the last entry of examples of metaphors.)

My theory of metaphor(m) stresses the prominence of allusion. Metalepsis, this trope-of-tropes could be one tool for an allusive yet affirmative struggle of reversals, performed with purposeful discontinuity on a stage of one’s own knowledge, with psychological and spiritual desire. The precursor’s, and history’s, presence is nether denied in feigned or sought out ignorance, nor granted a forfeit win through worship. However, remember in this playfulness, the work itself is central. It itself is the achieved trope, not some relic or illustration of the same. Metalepsis can be an important way to rethink history, ones own history and ones work, in our continuing struggle to revitalize art.