Creating Is Moving To A Location (here)
Note: (here). When we understand creating in this way we are actually understanding it as an instance of causation: as a caused change of state of an affected party. George Lakoff * 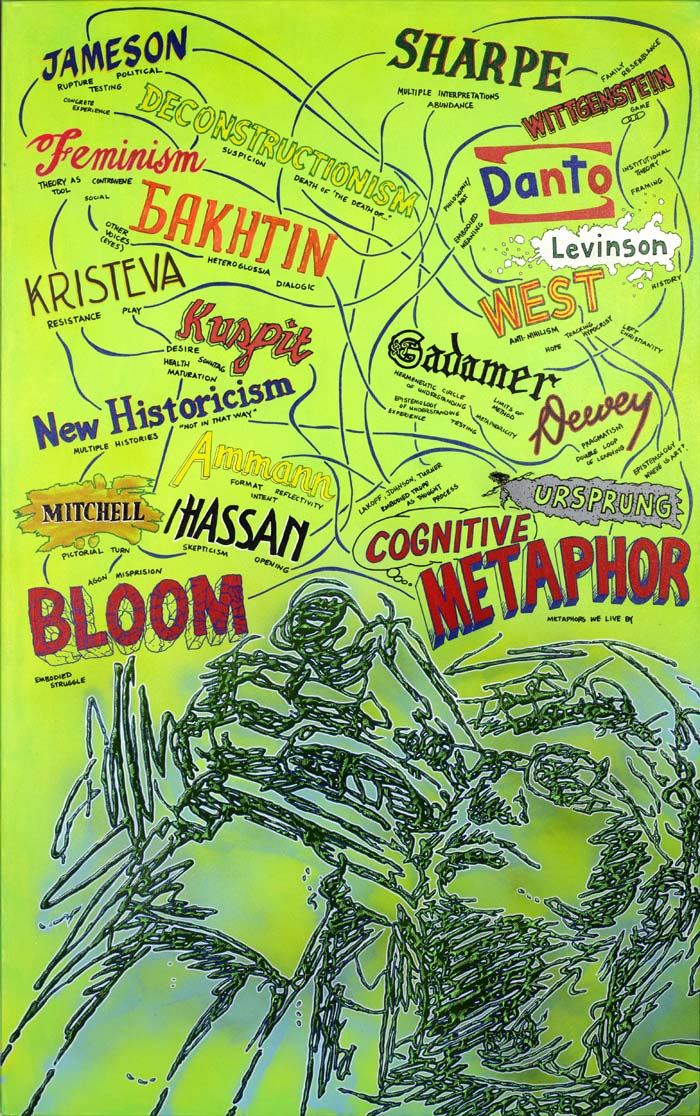 Scholars, other intellectuals and artists operate in landscapes populated with a vast array of competing and overlapping circles of discussion, dialogues both historical and contemporary. One’s own thought will reflect these, as one wanders among them seeking insightful inspiration, yet one must also critique them. To make a play on the title of Goethe’s famous novel, these are one’s eclectic affinities, thinkers to whom one’s own thought is linked. Scholars generally emphasize the importance of specific affinities to their own projects. The process is similar for creators, yet they dramatically foreground their divergence from their discoveries in others. In land surveying the most important practice is triangulation, the act of using multiple reference points to connect to and locate (that is, find and describe) ones exact position with the greatest possible accuracy. I am using this metaphor in this article, both because I find it very productive and because I am attracted to it as a former land surveyor and now both an artist and scholar.

I have described in various articles, my individual response to a current, specific situation in the artworld. That is, for the last several decades what is termed “literary” or “cultural theory” has had a signal, even hegemonic, position within the analytic segments of the fields of literature and visual art. In this several previous articles, and more in the future, I have and will explore the particulars of some of the theories themselves, tracing and retracing my search through the various ideas. This is a somewhat curious endeavor, because on the one hand, we know much of the outcome already, as I have already presented my theory of metaphor(m). On the other, I will remain open to fresh decisions as I retrace my peripatetic explorations, while continuously “tying them in” to my principal personal perceptions concerning art and creativity. Thus a doubling of exploration can occur as I recreate an intellectual journey and yet intensely live it, leaving it open to new finds. Perhaps this is something of a simile for painting itself.

In this second decade of the new millennium, dogmatic partisanship appears to have begun to wane. Nevertheless, most authors in these fields still appear to pay attention and respect to a delimited pantheon of theorists. The various theories comprising this multifarious enterprise include Structuralism, Poststructuralism, Deconstruction, Hermeneutics, Formalism, several Marxisms, some neo-Freudianism, Reader-Response theory, Feminist criticism, Relational Aesthetics, Performative Aesthetics and a few others. The dominance of “theory” has been so persuasive as to have given rise to an attack against it as if it were a single, monolithic entity as exemplified in Steven Knapp and Walter Benn Michael’s essay “Against Theory.” 1 Much of postmodern advanced theoretical reflection on literature and art is rooted in poststructuralist French ideological thought and has been polemically used to prod the sleepy beast that standard Anglo-American criticism unfortunately had become. Sole adherence to this group of Postmodernists can lead to simplistic clannishness or it can manifest academic trendiness. However, the creature is certainly now wide awake and frisky, (although, unfortunately not in standard art criticism itself yet). All aesthetic or metacritical speculation must come to terms with the challenges and insights within what is called literary or critical theory. My thought has been influenced by selected aspects of postmodern theory. This includes, nevertheless, a skeptical and sometimes even antagonistic response to the sophistry and solipsism of many partisans of theory. Contemporary literary theory has been perceptively termed the “hermeneutics of suspicion,” a term introduced by Paul Ricœur, who felt that all texts are corrupted by societal forces aiming for domination.2 This is a rather paranoid, totalizing conception of creative works, relegating them to symptoms of illness and of creators, seeing them merely as minions of the powerful. Nevertheless, literary theory can be intellectually stimulating, particularly as a provocative catalyst to thought. The sundry doctrines of theory expose new insights by subjecting every assumption to recrimination. The light of theory may be actinic, but it throws deficiencies into high relief.

Concurrently, the philosophy of art has assumed an unprecedented prominence in analytic thought. From accusations of “dreariness” by J. Passmore in 1954, aesthetics has developed into an exciting and important realm of inquiry in the hands of such philosophers as Arthur C. Danto, George Dickey, Nelson Goodman, Noël Carroll and Berys Gaut:3 Nevertheless, more than literary theory, it has tended to stay within its own frame of reference as Lydia Goehr has described.

[American aesthetics] continues seriously to investigate its relation to its single parent, philosophy. While it sometimes strives for independence, it never actually breaks free. Instead, it usually finds itself trying to reeducate its parent as a result of its own maturing. Perhaps this constant reeducation is a necessary, albeit unwieldy, component of the continuing rejuvenation of both aesthetics and philosophy.4

While this is true, aesthetics has much to offer working writers, artists and critics. Their reeducation could result in a healthy rejuvenation of creative practice. The stimulating effect of aesthetics on visual art can be illustrated by looking at Danto’s philosophical criticism. His inspiration of the institutional theory of the ontology of art has had a great impact on the art world through his critical reviews and books such as The Transfiguration of the Commonplace, which first appeared in 1981 and has since become one of the most widely read texts in its field.5 Other philosophical problems and solutions could be potentially even more enlightening. Particularly important in recent history was the widening of aesthetics as a result of the disappearance of narrow positivism as an over-dominant force, allowing the expansion in the field we see from the 1960s until today. According to Avrum Stroll, Ludwig Wittgenstein’s “idea that philosophical problems are ‘deep disquietudes,’ that they must be taken seriously in their own right and not be assimilated into various forms of scienticism as the positivists urged, gave new impetus to a field that the positivists had dismissed as a species of nonsense.” 6

Creators themselves have become acutely interested in aesthetics. Gordon Epperson is a musician who is also deeply involved with the philosophy of art. He finds this concern natural and necessary.

Musicians (like other artists) are inveterate theorizers, ceaselessly discussing their musical ideas and problems, analyzing techniques, making judgments, striving to get things “right.” They are preoccupied in practice with form, function, and meaning: and their special vocabularies, sometimes as recondite as the argot of professional philosophers, are rich in imagery. They are, to a degree, aestheticians, though it would surprise most of them to be told that.7

This is also true for authors and creators in the other arts; it is even occasionally true of critics, publishers, curators and the like. Aesthetics has had a greater, if less particular, influence on my speculations than has literary theory. The theory of trope I am charting, building and applying in my dissertation bridges several gaps. First, it contains elements of both literary theory and the philosophy of art which I sought out and applied. Second, it is important for me that it should account for aspects of creativity from the standpoint of the maker, the object, and the viewer, as well as being a critical hypothesis. Third, it should focus on visual art but have wider implications for other arts. Finally, it is primarily inspired by the poetics of metaphor and research discoveries in contemporary cognitive psychology and linguistics, with additional elements from other theoreticians and of my own creation.

In the painting shown above, now in the collection of the Art Museum of Thurgau in Switzerland, I am represented looking through a theodolite, viewing a mind-map-like array of all the names of the theorists and philosophers in this my original PhD dissertation, connected by lines as I see relationships among them, each name painted in a logo-like form reflecting their interests. This reveals my Diogenes-like wandering through their works and thoughts, seeking wise council which I apply in my own way as tools of understanding. The “world” of my theory is thus delineated indirectly in readers’ minds, obliquely. Such a format models the searching, stumbling path of theoretical discovery itself, while dramatically foregrounding the social, cultural and historical bonds which constitute the theory’s nexus—links to others in the original as well as computer-jargon sense. The two fields I survey here, literary theory and analytic aesthetics, frequently seem to despise each other, yet can be seen as co-dependent: a worthy topic for development in the future. The coming articles list kindred souls and a few clear opponents. Each will be rather cursorily canvassed for its direct bearing on the development of my thought.

A better metaphor than a link being “clicked on,” is a site being “measured to.” I will attempt to locate the development of my theory, of central tropes being found within formal elements, in the world of other theories, much as a surveyor “locates” (legally designates the site of) a piece of land by running simple connecting lines to nearby, already documented sites through physically measuring to them, drawing and registering plans. The theodolite and measuring chains that I use in this chapter are applied inclusively, thus occasionally brusquely. Let this be a plat (a map showing existing and intended features) of where I have built my speculation.