Metaphor is primarily a matter of thought and action, and only derivatively a matter of language. George Lakoff and Mark Johnson 1

Two applications serve as overt trials of my theory of central trope, first to an artistic and then to a literary oeuvre. In effect, I am painting portraits of the celebrated painter Vincent van Gogh’s art and the equally famous author Ernest Hemingway’s writing as seen through the method of my theory, looking for the presence of metaphor(m) and the process of its creation within their works. Experimenting on these two figures, I found that they provide excellent models of metaphor(m) at work. A central trope could be demonstrated in their work concisely, yet without over-simplification, typifying the utility of the theory in clarifying the nuts-and-bolts of creative achievement, which is my goal for the employment of this concept. However, I am jumping ahead of the study itself, let me trace the inquiry from start to finish. This article will focus on van Gogh, the next on Hemingway.

Van Gogh had been one of my initial inspirations for this theory. In fact, I was contemplating his painting technique and pondering his influences when the image of his brushstroke as a small flame struck me. In contrast, I chose Hemingway as a difficult case, due to that fact that one of his chief ambitions was to avoid metaphor. While I am primarily concerned with visual art, Hemingway was himself openly indebted to painting. Additionally, he offers a second subject for initial study who is far from van Gogh’s aesthetic interests, techniques and aspirations.

As is well-known, van Gogh’s self-professed goal was to bring the expression of emotion into Modernist painting. He achieved this to such an extent that, since his death, he has served as the paragon of success in the expression of passion in the arts. Granting his personal goal, how did he realize and embody this in his actual objects? How did he harmonize his influences from various forerunners, none of whom would seem to be an obvious candidate on which to ground an art of passion? This is a crucial point, as the pursuit of a central trope best begins with a close analysis of a creator’s agon.

Van Gogh desired to be both Jean-Francois Millet and Claude Monet. His interest in Millet sprang from the empathy van Gogh felt for the earlier painter’s subject matter. Millet expressed sympathy for the lives and environments of peasants. Van Gogh’s painting The Potato Eaters of 1885 is a culmination of his immersion in Millet. This work, though, in its heavy browns and greens, deep shadows and blocky brushwork reveals that the battle for his own central trope had just begun in earnest at this point. Shortly thereafter, van Gogh began to struggle with the methods of the Impressionists, following his contact with contemporary artists in Paris. At the same time, he discovered certain Japanese prints, including those of the prolific artist known in the West as Katsushika Hokusai. Fusing Millet, Monet and Hokusai into one composite predecessor figure, van Gogh applied combined elements of their techniques in attempts to convey his personal obsession with emotion. The desire to express passion was the focus of van Gogh’s vision; it was the engine of his endeavors.

He struggled with Millet-like subject matter and Impressionist paint application, adding a dash of Japanese draftsmanship. From the Impressionists he seized on brilliant color and the small, dash-like paint strokes. Nevertheless, their fascination with the play of light on surfaces did not interest him. Van Gogh’s misprision succeeded when he mapped the image of a flame onto the dot of Impressionist brushwork. This justified and heightened his use of sharp, glowing color and his frenzied draftsmanship. Van Gogh had antithetically become more “primitive” than Millet, while using similar subject matter, hence could envision himself to be “earlier” in a fashion. He painted more directly, less studiously than the Impressionists, again a form of imaginatively becoming prior to them. The heavy, segmented strokes of Japanese wood-block outlines offered a thicker, more direct form of mark-making which could assume the contours of flames.

In his paintings van Gogh makes a progression employing a complex of many tropes. The metonymies “a flame is fire” and “fire is hot” lead directly to the foundational metaphor “PASSION IS HOT.” This merges easily with “LIFE IS FIRE” and “LIFE IS HEAT.” A key synecdoche plays a major role, “the brushstroke is painting.” The artist expanded this chain of reasoning to all elements of his works, even composition, in analogous ways. “Passion is life” is his self-acknowledged central belief. “Brushstroke is flame is painting is passion is life” is his metaphor(m), his true central trope.

This can be seen mostly clearly in paintings such the intense self-portraits of 1889 and 1890 from St. Remy, the wild sky of the world famous Starry Night of 1889, or the flaming trees in Wheat field and Cypress Trees of the same year. Van Gogh had found his central trope and himself by discovering forms which palpably embody his perception of the world, which Robert Rosenblum in Modern Painting and the Northern Romantic Tradition succinctly describes as a “passionate empathy with nature, as almost a direct extension of human emotions” 2. He elaborated it in varied, and highly creative, if not always “healthy” forms. In dynamic use it could elicit perception of the blazing, living, growing soul of nature as in the still lifes of Sunflowers from Arles. Barely restrained from swelling into a conflagration, it carries psychological richness in the Self Portrait of 1889. Finally, it has become a devouring holocaust in several last works, such as Crows Over a Wheat Field of 1890.

Even in an artist often believed to have been “spontaneous” in the sense of unpremeditated, we see how thoroughly his metaphor(m) is a function of thought and creative deliberation. It requires a highly developed intellect, focused in a very specific way. It is often the ability to think both consciously and automatically (i.e. unconsciously or subconsciously). As van Gogh wrote in a letter to Anton Ridder van Rappard:

... I drew [The Little Winter Gardens] several times and there was no feeling in them. Then afterwards — after I had done the ones that were so stiff — came the others. It is the same with the clumsy and awkward things. HOW IT HAPPENS I CAN EXPRESS SOMETHING OF THAT KIND? Because the thing has already taken form in my mind before I start on it. The first attempts are absolutely unbearable. I say this because I want you to know that if you see something worthwhile in what I am doing, it is not by accident but because of real intention and purpose.

To create oneself through one’s works is frequently based, as metaphor(m) theory displays, on a simple discovery. Simple in no way means easy, or unsophisticated, but rather oh-so obvious in retrospect — yet only after-the-fact or in critical analysis, which is a scholarly form of reflection. By simple I mean something closer to elegant, but without the decorative overtones. A discovery which might even be seen as somewhat mad: the ability to think otherwise, prying loose an evocative tool of self-(re)cognition. These simplicities have the naked usefulness of truths. Van Gogh found, and formed, the element through which he could live. It is tempting to think that he knew this, yet perhaps did not trust it enough to have lived longer and more contentedly, but that is another story and a different conjecture. For van Gogh, this meant that his discovery of his flame-metaphor(m) allowed him to fully express his burning desire for expression, his conviction concerning the centrality of passion to existence. This is the vicious/visionary circle of the simultaneously invented and discovered central trope.

Expressing this in the chart, van Gogh’s metaphor(m)al blending could be diagrammed as follows: 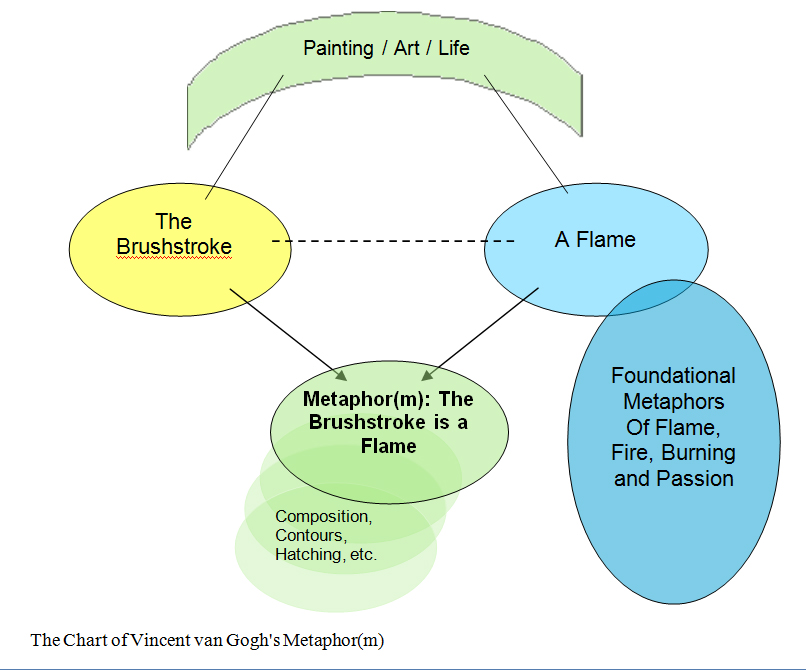