Subsumption and Misprision: Transumption/Metalepsis as a Thought Process 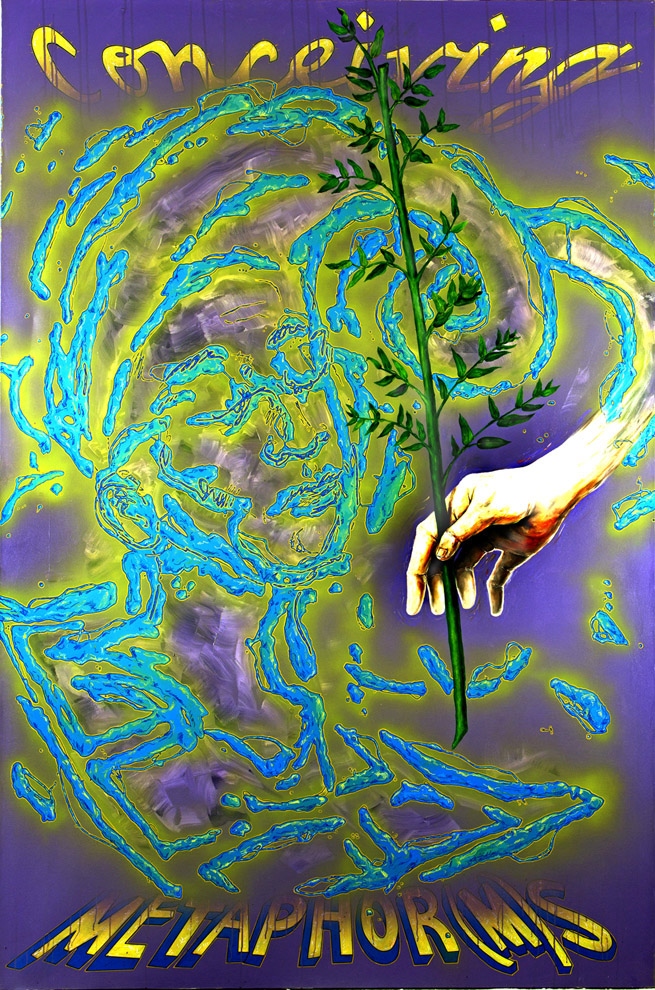 I have long been considering writing this article, but have been daunted by the realization that the idea would need, indeed deserves, a long, comprehensive discussion. It could easily become a whole book. So let this short text serve only as an exceedingly superficial introduction to an idea which I intend to expand at a later date.

My notion is rather straightforward, yet involves some fairly arcane vocabulary to describe it. Bear with me. I am suggesting that challenging and changing dominant important ideas, epistemological paradigm shifts as Thomas Kuhn calls them, are only truly accomplished by subsuming them within a perceived larger idea — not by countering them with their diametrical opposite. These “larger ideas” both encompass the ideas they are critiquing as truth, yet also contradict them by envisioning them only as a detail of this new larger whole. A profound change in a fundamental model or perception of events thus occurs when we are able to metaphorically step back and see them framed in a surprising new frame of reference. This, I suggest, is best modelled in art, yet is also the truth for all paradigms, be they philosophical, religious, scientific or artistic.

This involves the trope of metalepsis, also called transumption in an expanded form. As I have written about previously on this site, I am particularly inspired by Harold Bloom’s theory of misprision, which stresses the prominence of allusion and the trope of metalepsis. Metalepsis, also called transumption, is that figure of speech which plays a trope on another previous trope, often in an anachronistic or “frame-breaking” fashion. This trope-of-tropes becomes the tool for an allusive yet affirmative struggle of reversals, performed with purposeful discontinuity on a stage of one's own knowledge, with psychological and spiritual desire. The precursor’s, and history’s, presence is nether simply negated, denied in feigned or sought out ignorance, nor granted a forfeit win through worship. It is sucked into a new and more encompassing revelation, it is subsumed.

I will give only a handful of examples now, with the promise to delve into this idea of mine more deeply at a later date.

First the Ontology of Art

We are perhaps all aware of the dominance of the Dickie/Danto institutional theory of the definition of art nowadays. To sum it up superficially for those unfamiliar with it, it is the proposal that an object becomes art by being presented within the context of the institution known as “art” or “the artworld.” This I myself find it to be the truth, having been proven in Duchamp’s oeuvre and widened in Warhol’s Brillo Boxes and elsewhere. (In fact, as an aside, I would hope that this ends the generally primitive arguments about the definition of art and allows us to get to the much more important yet thornier issues of quality, value and meaning. But that is an issue for another discussion.) Yet the institutional theory feels somewhat limited. This can be seen in the exceedingly superficial and trendy version of this theory generally embraced in the artworld, especially in Neo-Conceptual Art. How could this theory, which seems to be an important kernel of truth, be overcome? By widening it. Subsuming it into a broader understanding through purposefully re-understanding it, misprision.

In his essay “Refining Art Historically,” Jerrold Levinson has proposed a logical, historical widening of the Dickie/Danto institutional theory into an interpretive one emphasizing conscious tradition. He sums his theory up in one sentence. “In short, it is [the view] that an artwork is a thing (item, object, entity) that has been seriously intended for regard-as-a-work-of-art, i.e., regard in any way preexisting artworks are or were correctly regarded.”1 This is a promising re-reading of the institutional theory, subsuming it into a wider and yet more personally delineated field. (I would add that part of the definition of art is to explore this “regard” through tropes, that art seeks to defy previous definitions and redefine itself. Art has a metaphoric, agonistic ontology, which is procedural and functional: things made to be regarded and interpreted as art-as-before and not as-art-as-before.) This variation is brilliant. It advances a theory which can appear to limit art to dry decisions made by momentary art power mongers to include the practice of making art in studios, in society and in the thoughts of creators and their public. The key metaphor of what the “describing/deciding judicial body” is, is broadened in a healthy fashion.

Christianity grew out of Judaism, began as a sect of it. Their beliefs are in many ways highly similar: One God who is almighty, eternal, righteous, just, loving, forgiving, merciful and so on. They share the Hebrew Scriptures (the Old Testament) as the authoritative Word of God, although Christianity includes the New Testament as well. And much more. The phrase Word of God, though was a great barrier for the early Christians. The all-important difference between Christianity and Judaism is the Person of Jesus Christ. Christianity teaches that Jesus Christ is the fulfilment of the Old Testament prophecies of a coming Messiah or Savior. Judaism often recognizes Jesus as a good teacher, and perhaps even a prophet of God. Judaism does not believe that Jesus was the Messiah, but even more importantly, it sees the written Word, the Scriptures, as the most important of all authority. The religion’s core and chief trope. Christians see this in the man Yeshua ben Yosef. Yet still felt that the Word was still paramount. We see a problem. How was this overcome? By transformative metalepsis. Jesus was declared the Word embodied as a human. The incarnate word. “And the Word was made flesh, and dwelt among us.”2 He is envisioned as a transcendent Logos, a widened conception of the Word. When simply described this appears a bit farfetched, in the concrete sense — they stretched far to get this idea. The ultimate misprision. Yet it was a masterful subsumption based in Biblical hermeneutics and scholarship, which resolved an important issue for believers.

This has often been the case when religions have been peaceful transformed, rather than abandoned or attacked. As another example, several “esoteric” groupings like Theosophy and particularly the Bahá’í faith attempt to emphasize the spiritual unity of all humanity by likewise subsuming the conceptions of Prophet and Messiah in Judaism, Messiah and Son of God in Christianity, (Last) Prophet in Islam, Avatar in Hinduism and more under the notion of “divine messengers.” It would allow each religion to retain its vocabulary (which is very divisive now), yet see a new unity. It does not appear to be working, but I believe such metaleptical ideas are indeed the best, perhaps only, path to success in a peaceful fashion.

As Thomas Kuhn, discussing science, points out, these shifts are often NOT peaceful, however. Indeed, create short periods of great discord and battle. Kuhn furthermore saw the shifts as revolutions radically overturning earlier beliefs. While this seems so on the surface, I believe if one delves deeper, it can be seen that in truth most were only revelations because those “in power” violently resisted them. The ideas themselves can be seen to usually have been instances of comprehensive subsumption and metalepsis.

As an example, these changes tend to be overly dramatic in sciences that appear to be established. One of these was physics shortly before Einstein. Physics seemed to be a simply assembling the details of a largely conceptually cast-concrete system. Lord Kelvin legendarily lectured in 1900 that “There is nothing new to be discovered in physics now. All that remains is more and more precise measurement.”3 1905, Albert Einstein published his paper on special relativity, which disputed the rules of so-called Newtonian mechanics. It did indeed radically change understanding, but primarily by showing that Newtonian physics was correct (and still now useful) only in smaller limited arenas such as on the Earth but ignoring anything larger. Newtonian physics became a subset of Einsteinian relativity physics. Subsumption. Metalepsis. Gravity exists, but only as a local description of curved space-time.

In art, we need to do that right now. One example lies in composition. The tackling of the practical and philosophical problems of composition in art (especially painting) has been an impatient, important, agonistic, metaleptical struggle. Not in order to simply form novel conventions, but to move on to distinctive organizational structures, new tropes useful for the embodiment of arisen desires. Now we need one beyond the affected maniere a la Duchamp of Postmodernism so far; one for our new critical anti- purism.

To sum up: you want to change a constricting, seemingly somehow-incorrect conception in any field of human thought? Then attack it not by simple inversion, but by creatively seeking a vision that encompasses in while making it more progressive, accurate to experience, or useful. This is done through creative purposeful “misreading,” misprision, of the earlier metaphor. Find a new metaphor that metaleptically contains yet widens the one you are struggling with. It is my assertion that this is what has most often been true of important re-imaginings of the past.