Painting and the Novel: Antithesis 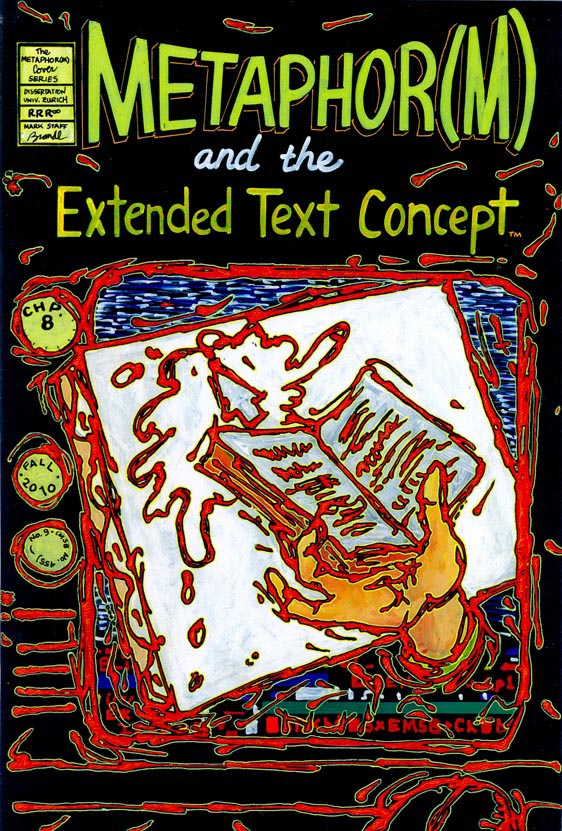 Whereas both media theorist Christian Doelker and I have been known to claim that new media “demand” a certain learnedness, this is exaggeration. Rather, they offer opportunities. “Demand” makes these technological developments sound all-important and dictatorial. Such language is symptomatic of a common affliction: the adoration of new media. We must stop worshiping or reproaching our tools and begin to use them. Their importance is in their application — the philosophies and expressions they embody. Significance can often be better thought through in conditions of self-imposed circumscription, testing and transgressing the boundaries of received deliberation. In this light the traditional media of painting and the novel are the major league of discourse.

There are many other reasons to chose to work in or study these two: slightly more resistance than newer forms to the vagaries of trendiness, self-reliance in production, proven philosophical openness, sheer presence, anti-Puritanical sensuality, a tradition of shedding the skin of tradition itself, a confidence in redefinition rather than cultural amnesia and ignorance. As I discovered after moving to Switzerland from the US, one reason often cited in Europe for painting or writing novels, or alternately for not doing so, is simply stated as “tradition.” I fervently take exception with this. “Tradition” used so abstractly has no identity other than that of a bothersome insect. The standard street myth is that Europeans are borne down creatively by their (wonderful) tradition, while Americans are freed to be so creative by their total lack of one. This is self-imposed self-aggrandizement by both continental groups. Citizens of the New World have tradition — many traditions, almost all European ones and more. They are the descendants of the Old World, not from another planet. If Europeans have it, so do they. Additionally, North America is concomitantly not “freer,” no matter how frequently they assert that. For most minor artists and authors I have met on both these continents tradition today seems to mean only a feeling of a burden, loaded with little actual historical knowledge at all. What is needed is knowledge without a debilitating sense of a weight — dialogue with and against tradition, as I have discussed previously and often. Painting and the novel offer good conditions for this in the sheer opposition they present to the creator.

True, earlier in the century there was too much emphasis placed on these two media and this was exploited to be dismissive of many others. Yet, as noted, there is an equally contraproductive inversion at work now. Early photographers honored painting to an extreme. The best found their way out of this. Peter Halter describes the solution to this problem for photographer Paul Strand.

In regard to painting this meant that as a photographer one should learn from it rather than try to imitate it, as was common…at the time…2

Now “new” media — anything new — may be glorified merely for the fact of technological newness. We in the art and literary worlds have too often only memorized the idea of a “burden,” creating for it an illusory existence.3

Paintings and novels are quintessentially antithetical. They incorporate, use and criticize. They have achieved a condition of being perpetually “genres undermined.”4 Painting and the novel are artistic disciplines and forms which have a history of sabotaging themselves. They are in a constant state of crisis. This makes them fertile ground for the application of my metaphor(m) theory and for testing the broadness of the extended text concept. On self-critique: I have stated this in the odd passive construction so common to art critics, speaking of what “painting” or “the novel” does, when clearly that is a metonymy — it is painters and authors who do things, which then exist embodied in paintings and novels. Painters and novelists are deeply involved in a dialogue with and against the past. Let me cite Harold Bloom:

…I cite again the Emersonian difference, which is to say, the American difference: a diachronic rhetoric, set not only against past tropes, as in Nietzsche, but against the pastness of trope itself, and so against the limitations of traditional rhetoric.5

I would purport that in our period this is the condition of the awake perceiver everywhere. Bloom’s insight is deep, and it is Emersonian, but by no means is this limited to one country as he presumes. The pastness of trope must be wrestled with and overcome. Each painter and novelist must struggle with his or her daemon, who is the angel, who is the attendant spirit (from Latin, genius), perhaps even genie: the precursor, god and self. Space is fought for and won with blood, not avoided with new toys incorporating dead ideas. This ineffable spar is the only way to occupy the holy ground of the other, finally creating one’s own sacred space. As I have discussed in my articles about my reinterpretation Bloomian Agon (including an article on this site: http://www.metaphorandart.com/articles/bloomagon1.html), I believe this struggle should now be reinterpreted, away from Bloom’s oedipal, joust-like view and be visualized as a critical public dialogue, modeled on call-and-response. All the same, the necessary exertion remains.

Traditional forms and formats now have aspects of new media and vice versa. Notions are best transported to other realms in order to facilitate the greatest concentration: in other formats, within contrasting aesthetic objects and in surprising relationships. Rudolph Arnheim has shown that the forces of composition themselves, especially as gestalts, have psychological force, hence convey meaning. Structure can embody disparate, complicated, even contradictory meanings.6 Cognitive science and metaphor theory have expanded and grounded Arnheim's insight.7

Painting and the novel have been in a permanent state of crisis for a minimum of several hundred years. What more could one ask for as a difficult, challenging and rewarding fray?