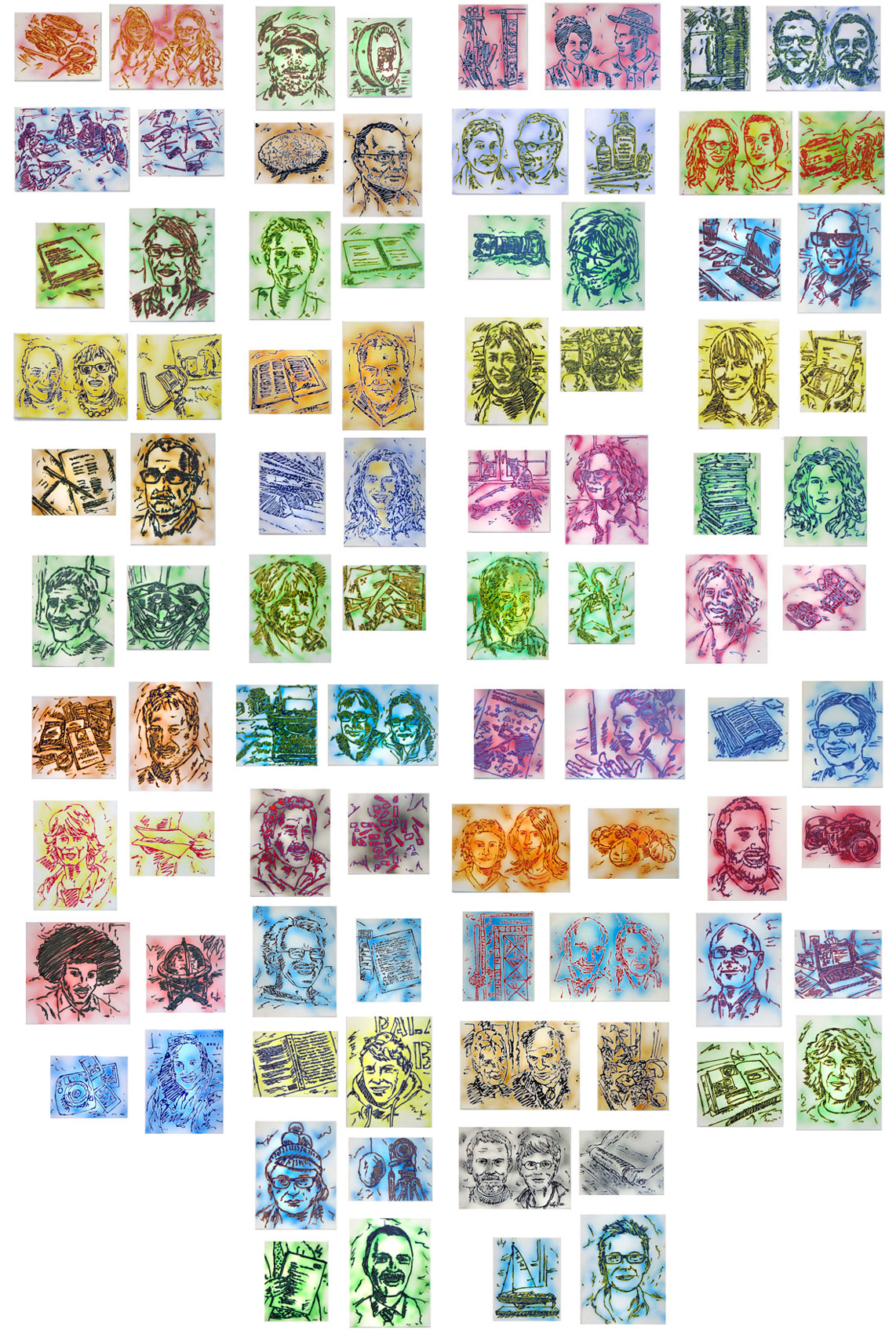 My current exhibition, as of this writing April 2015, is titled “The ’Hood in miim Chopf.” This is a combination of American English slang and Swissgerman dialect. In full English: “The Neighborhood in My Head,” and in Hochdeutsch: “Die Nachbarschaft in meinem Kopf.”

I show largely outside my living area nowadays. In the gallery that represents me in Zurich, Jedlitschka Gallery, or in Italy, New York, Chicago, elsewhere in Europe and so on. When I was asked to exhibit in the beautiful ancient vaulted exhibition space of the Vadian Bank, I had to think of something appropriate to being there. That is one of my joys as an artist, to work in what I call “Contextually Specific” ways. My work generally merges painting with installation, sign-painting and sequential art, often with a central conceptual framework that comes from the context of where it is being shown.

I decided that since the location was somewhat local, I would make it a celebration of the VERY local. I decided to do portraits of people who live near me in the village of Trogen, AR, Switzerland, people with whom I have regular contact. Thus neighbors. That is my Viertel, or as we say it in the US, my “Hood.” However, then I thought to expand it a bit, to bring it into our mobile present. I added to the group people who I see regularly, who I feel to be my neighbors, but who do not live directly near me. Thus, the neighborhood in my head, in my thoughts. These are people in Trogen, St. Gallen, the local artworld, Liechtenstein and more. Ones I talk to and think about.

Each portrait consists of two panels. The first is an image of their face in my style, in a variation I call “drawing-paintings” as they are somewhere between those two media. The second panel is of a thing they chose, or I chose for them, that represents them in some way. In the Renaissance and Baroque arists would often paint objects that were synecdoches from the interests of the sitter. I always loved that, this is my version. In the opening reception, viewers could ask the individuals what the objects are and why they were chosen.

The paintings merge inspiration from Jackson Pollock, R.B. Kitaj, Jacopo Tintoretto, the sign painting of my father Earl Brandl and sequential art/comics artist Gene Colan. They appear to be fashioned of drips of sign-painters enamel, their strokes and lines mutate into representations of themselves. Fluidly-drawn abstract swirls of lines mutate into images of faces when viewed at a distance. generally speaking, I do visual philosophy in slang. 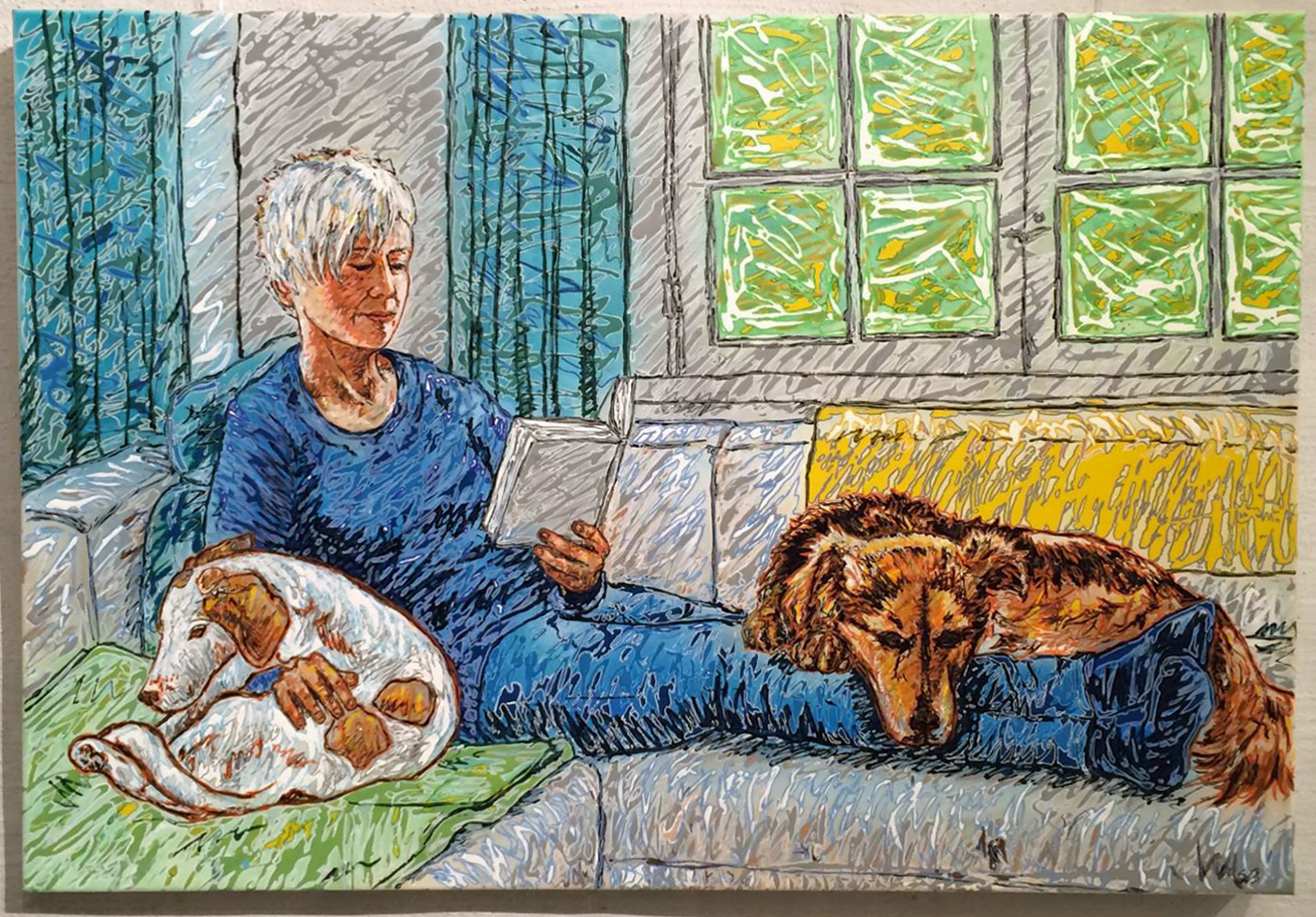 The entire project, or painting-installation as I call such things, is a series of tropes. It is a metaphor for the social dialogues one has in one’s head. Additionally, it is a metonymy for the dialogues, as the neighbors and near-neighbors in the images substitute for the discussions and interaction I have with them. The series can also be seen as several synecdoches: the faces stand for the people and are a part of each, the accompanying represented objects usually are parts of the processes that the people enjoy (their interests), and the people are part of what is in my neighborhood.

One more conceptual and metaphoric aspect. The paintings are for sale in pairs, as together they make up the portrait. However, the individual subject, those people who I represented have also the option of proposing a barter with me. A “Gegengeschäft” or “Tauschhandel” in German. Especially since most are not collectors: They can think of something they could do for me or give me or the like for me in exchange for their portrait in place of money. Something of a temporal metalepsis as it pushes the activity of value transfer back to how it was before the widespread use of money, and this space is, as mentioned, sponsored by a private bank.

Welcome to a tropaic aspect of my world in Eastern Switzerland, the “Ostschweiz.” The show can be viewed online on Facebook and here (as I post images).