Why Bring Literary Theorist Harold Bloom and Agon into my Theory Based on Cognitive Metaphor?

Cognitive metaphor theory proffers a mode of thinking which can be applied to the analysis and creation of art, while accentuating the efforts of the makers of these objects. After the object-only orientation of Formalism, after the medium-only focus of Deconstruction, this may lead to a feeling of liberation, of agency.

Nevertheless, this is a theory which may be seen to bring with it a new sense of the burden of the past. Whereas the Formalist Modernists felt free from the past and the Deconstructivist Postmodernists are endlessly tangled in an inescapable present, authors and artists as viewed through cognitive metaphor theory are directly responsible for fashioning their own tropes through the processes of extension, elaboration, composition and/or questioning. This they accomplish in and through the formal parameters of their work, with enough cultural coherence to be able to communicate, but enough originality to be significant. Important tropes cannot merely be selected from a list; they are discovered and built out of revisions of cultural possibilities, in fact, fought for and won. Thus Harold Bloom’s theory of antithetical revisionism also contributes an important component to this paper, as he writes:

But again, why should someone crossing out of literary criticism address the problematics of revisionism? What else has Western poetry been, since the Greeks, must be the answer, at least in part. The origins and aims of poetry together constitute its powers, and the powers of poetry, however they relate to or affect the world, rise out of a loving conflict with previous poetry, rather than out of conflict with the world. ... This particularly creative aspect of a kind of primal anxiety is the tendency or process I have called “poetic misprision” and have attempted to portray in a number of earlier books. Harold Bloom 2 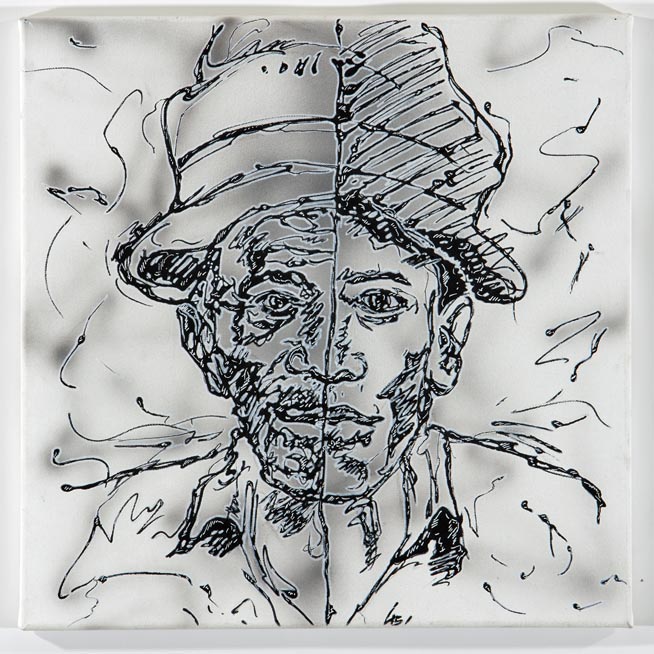 The heart of Bloom’s theory of misprision is the concept of an indispensable, antithetical agon of each poet. With poetry being the chief artistic discipline for Bloom, the word poet may also be replaced here with artist, which is what I will do. Revisionism is exalted to the central fact of artistic creativity. Agon is Bloom’s term for the conflict arising from the anxiety of influence. Each and every author must wrestle with his or her precursors, the ones who inspired them to be writers in the first place. In amendment of Bloom, though, this “loving conflict” also transpires with the world, as it involves tropes of bodily experience as outlined in Lakoffian theory. Creators seeking individual ways to convey their experiences within their media, are necessarily forced to fence with comparable expressions of similar experiences by their predecessors, therefore primarily with their predecessors’ tropes. Cognitive metaphor theory offers an important basis for the study of art and literature, in particular their formation. Bloomian agonistic misprision completes the portrayal of the process by which creators arrive at the cognitive tropes so described.

The theory of central trope which I developed in my dissertation is postmodern, as described. It is a model unfolding the construction by authors and artists of distinctive central tropes in the tangible forms and processes of their media. They achieve this by means of an agonistic struggle with predecessors' tropes, doing so in order to uniquely articulate personal perceptions and experiences. Such tropes in the hands of artists are both metaphoric and meta-formal, thus yielding the punning term metaphor(m) in my title. This word describes and embodies the core of the theory. For creators, artistic value is grounded in form, the way a work is made and its technical aspects. Yet, turning Formalism on its head, these attributes in themselves are significant only due to their meta-properties as tools and modus operandi involving context, tropaic content and cultural struggle.

Although clearly inspired by Freud, Bloom can be pushed beyond the simplicity of most interpretations of Oedipal father-figure relationships. I, instead, see the possibility of a non-Oedipal interpretation or variation on Harold Bloom's antithetical revisionist theory of agon, of misprision in artistic creativity. Bloom’s notion is perspicacious and very influential on my theory of metaphor(m), but I believe an adaptation of it replacing oedipal desire with dialogical call-and-response is even more promising.

I agree with Bloom that every artist must wrestle with his or her precursors, the ones who inspired them to be artists in the first place, while also struggling against themselves and previous versions of themselves. “Strong” creators, as Bloom calls them, form new and independent spots for their creativity in a continuous conflict, which he terms agon. Bloom’s thought is very oedipal: from the Oedipus complex (1910 CE), coined by Sigmund Freud from Sophocles’ play Oedipus Tyrannus (429 BCE), in which the title character, the Theban hero, answers the Sphinx’s riddle and unknowingly kills his father and marries his own mother. Overly simplistically described, Bloom’s theory contends that artists have a central rivalry with the past, with those artists who came before them.

However, I assert that such agonistic, dialectical struggle is more than simply oedipal. Art sometimes advances through homage (think of Jazz) or through wholly new pressures and skirmishes. This is particularly important today, when many of us have multiple cultures and complex relationships to tradition and anti-tradition. Artists’ inherited cultures are wrestled with in complex fashions in their artworks. Creators struggle against their inheritances, yet also pay respect to them, thus using them as material in the construction of their singular identities, in the establishment of the terrain on which they are grounded and, contrarily, from which they journey.

Bloom can be pushed beyond the simplicity of most interpretations of Oedipal father-figure relationships. In truth, I see a clearer source than in the Greek myth of Oedipus for Bloom’s thought in Jacob’s struggle with the angel (or God) as described in the Bible 3, not detailed in the Qur’an, but discussed by Qur’anic commentators as a walk and debate with an angel; or in the African spirit Eshu, the patron saint of crossroads, who is both young and old simultaneously and who is fond of playing tricks on people for the purpose of causing maturation. The river Jacob crossed to have this important encounter is the Jabbok River, also now called the Zarqa River. The name Jabbok is quite rich in associations, being an aural anagram of Jacob, and meaning “to flow,” “to pour out,” even “a wrestling.” 4 Eshu is important as he embodies much of the unity of homage, development, questioning and agon present in African-American artistic expression, particularly Jazz, which inspired this insight in me. Thus, blending the traditions I mentioned, I call my version Jabbok-Eshuian agon. This odd blending is an application of my theory structurally and offers a doorway into two rich storehouses of foundational cognitive metaphors, thus helping to further integrate the Lakoffian and Bloomian facets of the theory of central trope. I will write more on the specifics of my Jabbok-Eshuian agon in a future article.