Creating Context and Meaning in a Work of Art With Metaphor 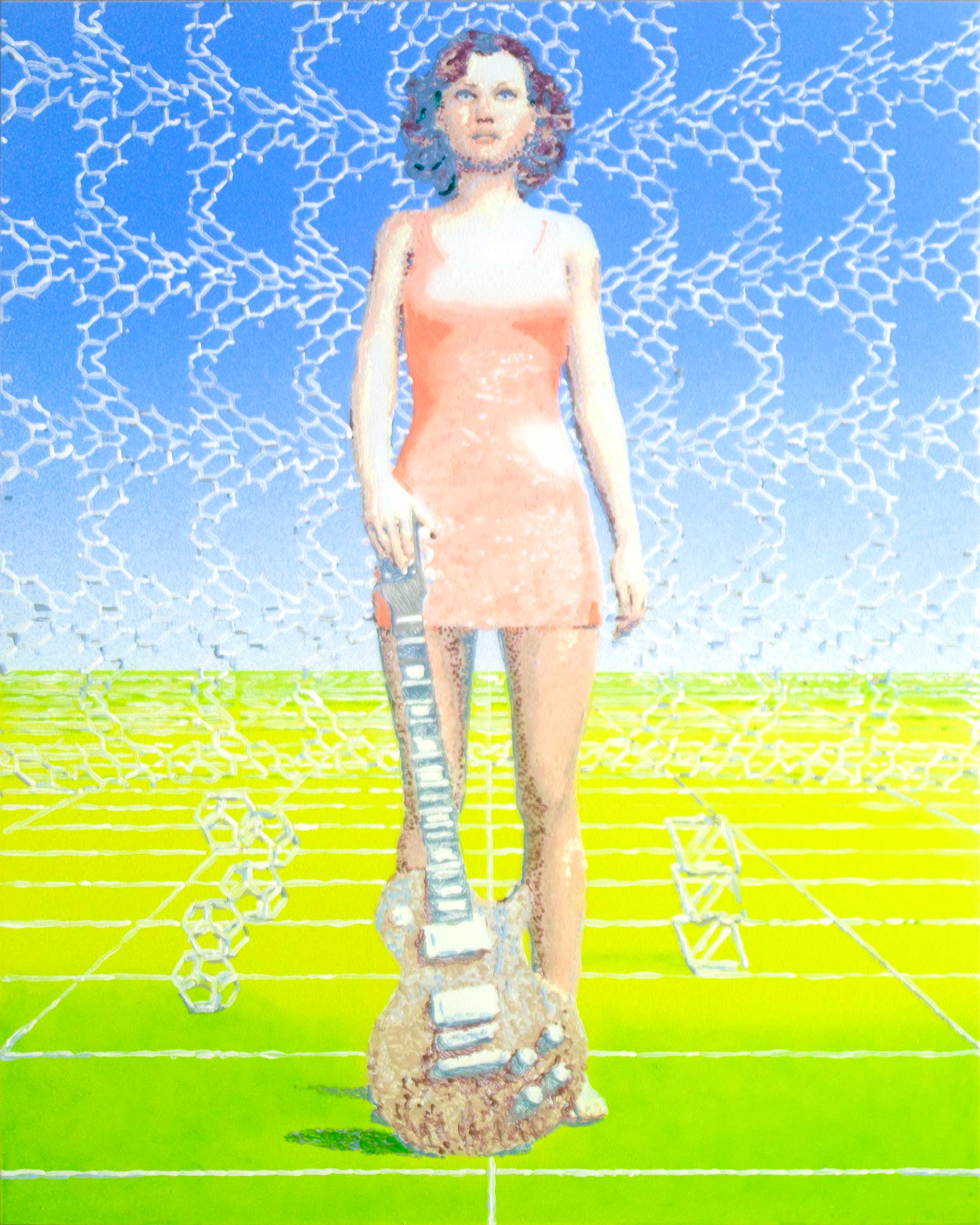 In 2014 I created a painting series called “guitarist,” and in this article I will explain how metaphor provides this series with context and meaning.

This series is called “guitarist” after its subject, a young woman playing or posing with her guitar. The Guitarist lives in a virtual land of geometry, where nature appears as discreet forms constructed of points, vectors and polygons. It is a landscape of clear, austere, and elegant beauty. Step through the window of the picture plane to enter a virtual space where every entity is defined by an algorithm. Step forward and each footfall is located relative to zero. Pick a flower and notice the petals are covered in numbers, each one with special significance for its attributes. Every ray of light illuminating this world travels on measured lines. When the Guitarist starts to play, the waves of vibrating steel strings resonate in frequencies that are like slitherings across a graph moving in perfect symmetry to connect the deft touch of her fingers on the chords to the delicate nerves in the ears where they become sweet sound. This is an imaginary world that tenuously exists on a CPU and is glimpsed ever so slightly as a likeness fixed concretely in paint.

The painting begins as a 3 dimensional digital model that emulates observations of the everyday world and represents a unique situation. These paintings are in a sense measured, in that the realism is possible because the computer calculates the geometry, color and lighting and projects it onto a virtual two dimensional plane. In a scientific manner the view is broken down into its smallest units of color and converted into a table of numbers. Then in the analog world of the painting studio this data is converted into paint mixtures that are applied by hand to the support to render the virtual image in concrete materials.

The idea is to create images that originate in measurement and calculation and to calculate each color and brushstroke in advance. This is precise up to a point, but the process of converting these values into concrete materials is less precise, less certain, and as a consequence stochastic variability is introduced. Before photography these kinds of paintings were constructed using manual techniques. Then painters began copying photographs. Now with the digital model photography is unnecessary. The model is complete and as such the painting is derived from the model and nothing else.

The Guitarist is proud, dignified, feminine, autonomous, equal to a male viewer. She never carries a weapon, because where she lives people would rather sing and listen to music than to wage war. When depicted nude she could be at the gymnasium in Plato's Republic where men and woman exercise together in the nude and as equals.

The technique and subject matter combine to create a metaphor. The 3D digital environment that these paintings originate in are perfect, measured, and clear. Confusion often leads to conflict, but in the perfectly clear 3D world where the Guitarist lives there is understanding and harmony and hence no conflict. This virtual land is a metaphor for utopia. It exists nowhere, even if the CPU could be a place, and it is a better place free of the cruelty, violence, and injustice of our own world. Like utopia, it is invented, like utopia its viability is unclear.